skip to main | skip to sidebar

Cobh. For many Irish men and woman was this the last place they saw of Ireland before barking on the dangerous trip across the fierce Atlantic Ocean. For  you of my readers who have followed me and this blog the last 2 years will remember what my bachelorthesis and what going to a place like Cobh mean to me.

But let me get to my point and telling you about how it felt going there, to also see the last harbour for Titanic before she went down outside Newfoundland, 12th april 1912.

Cobh has been colored by its naval and marine history, but when you’re there today you cannot feel the vibrant ‘mood’ that you would have felt if you walked along the dockside let us say in the 1880’s.
But let us not dwell on the past. I will show you how Cobh is today.

Here goes:
The first I did when we were walking towards the trainstation was to....get lost. Yes, this day I had NO sense of direction at all...so started wandering in the opposite direction of the trainstation and if noone had stopped me, I would have walked straight out of Cork... 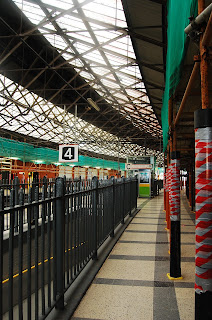 But in the end we found the trainstation...and got ourselves some breakfast there while listening to the rain that was falling outside...wish I had brought an umbrella :p

To sit on the train, and just stare at the rain...what a feeling. Solveig looked around for something interesting to take pictures of

This was the first thing we saw when stepping off the train in Cobh. It was raining cats (and dogs for that matter), but we wouldn't let this stop us. 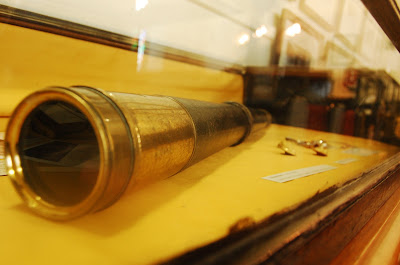 Our first stop was a church that had been turned into a museum over the history of Cobh, and it felt nice to get out of the rain and simply walk straight into a treasuretrove. It was amazing to see how they had turned this church into something else after the congregation got too small.

Here are some pictures from the exhibition:

After a long and interesting discussion with the guide on the subject of Irish emigration, we braved the weather once more, heading for the dock. We were looking for the memorials for Titanic and Lusitania, and we passed it a couple of times before we actually saw them...so typical of me...
﻿ ﻿
﻿ ﻿ After a touristy morning, it felt sooooo good to get out of the rain, which was heavier than before and into a pub for a pint and some planning. And here I will leave the story until the rain stops...

Cork. A place where the people talk really fast, so you got to listen VERY carefully when they try to tell you something. Beside that: I like Cork. This may come surprising to some, since I've gone on and on about how I don't like cities that much, but this place reminded me of home. Not too big, nor too small.

The busdrive from Waterford was nice, and we experienced all the different facets of the Irish weather...well, sunshine-rain-sunshine-rain (+ rainbow)-sunshine etc
After some misunderstandings we ended up at Kinlay's on the north side of the river. We were very tired after walking around with our backpacks (add a fiddle + some shoppingbags), so we took a nap before making dinner in the kitchen and exploring the hostel.


The first evening we spent playing backgammon and making plans for the next day. We decided that we would go to Cobh (pronounced COVE)...and I will tell you all about it in just a few lines time.

Cobh has a somewhat special place in my heart. Well, doesn't all of Ireland have such a position you might ask...
The simple reason for this is...my bachelorthesis. Writing so much about all the Irish men and women who left this small coastal town in search for a new and better life, left a mark in my soul. So I believe you can understand why I had to see it with my very own eyes
Posted by The Banshee of the North at 15:33 1 comment:

The Banshee of the North
Ålesund , Møre og Romsdal , Norway
I 'm a hobby-poet who love to write about love, death and everything between. Extra active around full moon...

The waves of Donegal